So your dog is worried by other dogs…?
I mean worried. Not terrified. Just that he’s uncomfortable around dogs he doesn’t know. He’s not kicking off every time he sees, or even meets, another dog out on walks and he’s never bitten, although you fear he might snap at another dog if he were pushed too far.

Distractions
Well, there’s no doubt distracting a dog with food treats, or playing a game with them (if they are willing to do either), can be a useful tactic to make sure your dog chooses to engage with you, rather than bother about the other dog. Giving your dog a job to do, like agility, or obedience exercises, which takes their focus off other dogs when they are around will serve much the same purpose.

Avoiding and escaping
It’s also going to help your dog feel more comfortable, and safe, if they know you are going to move away from other dogs as soon as you see them, so the subject is never broached. Diving into the shrubbery, ducking behind cars or going for 5am walks so the stress of even seeing other dogs at a distance is avoided – yep, all part of the package of advice to make life with the reactive dog easier.

Carried out correctly, with good timing, distracting and avoiding have their place in managing the worried, reactive dog.

But allowing your dog to learn how to predict whether other dogs are safe, or unsafe, and have the power to change how you behave around other dogs, is a skill distracting and avoiding interferes with. Sometimes we need to interfere less, and interfere differently. If our dogs never get to meet or see other dogs, how can they learn how to engage with them? That doesn’t mean we should just “let the dogs get on with it”. Or allow them to “sort it out for themselves”. Despite being recommended by a lot of trainers, this approach can go horribly wrong. It’s just not worth the risk. It’s not fair on any dog and is very likely to make many dogs far worse. So here’s something else you can do to help. Help your dog learn to observe dogs from a safe distance. Then consider if closer encounters, progressed carefully, under safely managed conditions are appropriate.

Observation
At a nice safe distance, when your dog sees another dog and alerts to it, with a slight lift of the head, ears and tail perhaps beginning to lift, eyes focusing on the other dog, you should draw calmly to a halt. Relaxed. Standing still(ish). Not frozen. The rabbit in headlights look is not wanted. On a loose, long lead, watching and waiting. Saying nothing. Doing nothing except observing your dog. You want to see your dog observing the other dog, not just looking or glancing at him, and then looking back at you. We want to see (as far is possible) your dog’s behaviour as if there was no owner attached to the lead. We don’t want to see actions taught by the owner. Food may need to be kept in pockets; toys away somewhere else. The dog should not be pestering the handler for food. If there was a safe way to do this offlead, we’d do it offlead, but it rarely is. 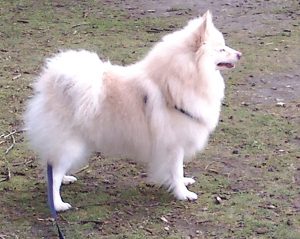 What you are looking for is for your dog to DE-arouse. To make the decision that the other dog, at that moment in time, in that place, is OK. To see him drop and or turn his head, relax his body. His tail to lower. You are looking for changes in millimetres. In some dogs that can be really hard to see. Others, it is very obvious. What happens as a consequence should be to your dog’s advantage. You can either drop some food on the ground or you could make the decision to move away from the other dog and/or go on your way in a different direction. Or do both. You haven’t interfered, except to respond to what your dog has shown he needs to have happen. That when he said to the handler ‘whoah! Dog up ahead! Let’s stop and see what’s what before going on!’ and then followed by ‘Oh – it’s OK. I can see we’re safe’ you noticed, and acted on that information.

But what if….
But if instead of relaxing, and his arousal levels increase, rather than decrease, he is heading towards a point of no-return, and you know in the next second he is going to kick off, that needs interrupting. Promptly. The window of opportunity to do this is limited. So if your dog stands up higher on his toes, even by a millimetre, his tail and ears come up higher, his body tenses still more, that’s when you do need to interfere. Just a little. If your dog is relatively calm (and being calm enough may need preparatory work), it should only need the handler to take a backwards step and movement, or just light touch with a finger somewhere on his body to have him glance to see what is happening behind him, and so interrupting that inevitable build up to kicking off.

Festina lente
If those subtle signals don’t work immediately, then your dog is already too aroused to behave appropriately, and the likelihood he is going to kick off is high. Not what is wanted! So cut your losses and move AWAY. Create distance. Fairly rapidly, but not in a rushed or panicky way. You don’t want the dog to believe there really is a reason to panic or run away. That cool, relaxed ‘Let’s Go!’ strategy may need teaching to the dog first, away from other dogs. Next time avoid being so close that an escape is needed.

Over time, with repetition, your dog will learn he can STOP you taking him closer to other dogs until he has them sussed out, knowing you aren’t going to make him go closer than he is comfortable with. It should also start to enable less antagonistic communication. As the dogs observe each other it gives them the opportunity to exchange the more subtle, gentle signalling that dogs are so good at if they have the opportunity and stress and over-arousal are taken out of the picture. 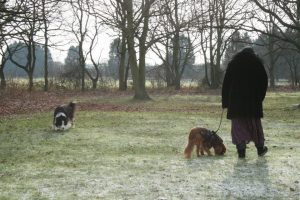 You, and your dog, will also learn to be quicker at making decisions about other dogs, because you are both going to get practice at doing it. You DO need to practice it too. Just doing it once or twice won’t hack it.

So observe more, and interfere less whenever you can.

This site uses Akismet to reduce spam. Learn how your comment data is processed.